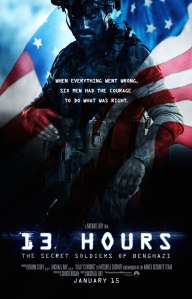 Our son took me to see “13 Hours” on Sunday morning.   The movie recounts the events of September 11, 2012, when the US Consulate in Benghazi, Libya, came under attack.   The US Ambassador to Libya was killed in the attack along with a few others.   The then Secretary of State, Hillary Clinton, has been blamed for the deaths.   Certainly the US State Department was slow to react.

There is a deeper, more troubling question here – what is the US doing in Benghazi?   Chris Stevens, the Ambassador, said it was to support those who want democracy.   Really?   There’s little evidence in Libya, or elsewhere in the Middle East, that anybody wants democracy.   If they do, they want to use democracy to get power, after which there will be no more democracy!

BBC World News last night led with a disturbing report on Benghazi, a city that has been almost completely destroyed by factional fighting.

It’s also about to fall to ISIS – the same ISIS we’ve been told is on the run!

Europe is still not ready to face the twin challenges of Islamic terrorism and the mostly Islamic invasion of the continent, taking place through the migrant crisis.

Denmark and Sweden have both been in the news this week.   Denmark’s parliament has passed legislation that will confiscate the assets of migrants with more than $1,400 in cash or valuables.   This controversial decision actually brings migrants into line with Danish citizens, who cannot receive government help if they have more than the equivalent of $1,400.   The decision is likely to deter migrants, which was likely the intent behind it.

Sweden has taken in more refugees than any other country, proportionate to its population.   Last year, more than 163,000 arrived in the Scandinavian country, following the announced decision that nobody from Syria would be turned away.   Now, the government says that up to 80,000 (almost half) will not qualify to stay and will be deported.   The government had to do something following a dramatic increase in the number of rapes and the murder of a 22-year-old female volunteer by a 15-year-old “refugee” at an asylum center.   Concern was expressed by one official at how traumatized the boy must have been!   (Yes, really.)   Sweden’s anti-immigrant right-wing party, the Sweden Democrats, unsurprisingly is gaining ground in the polls.

Germany took in more refugees than anybody and has also seen a marked increase in the number of rapes.   There are also increased fears of terrorist attacks as ISIS encouraged recruits to accompany refugees en route to Europe.

The European Union is failing to deal with the migrant crisis, which is threatening to bring an end to the Schengen Agreement, one of the EU’s proudest achievements. Schengen brought about the free movement of peoples throughout Europe, an arrangement now in danger of collapsing.

These are not the only problems facing Europe.   Note the following comment, from an article by Charles Moore, former editor of the Daily Telegraph:

“When a real crisis arises, the EU cannot act.   It failed in the former Yugoslavia in the 1990s and finally had to let the Americans come to the rescue.  Today, some say the EU is more vital than ever, because of Russian adventurism.   But the miseries of Ukraine suggest that the EU cannot successfully fill the vacuum created by President Obama’s abandonment of American strength.”  (Charles Moore, DT  ‘European Civilization is in danger of succumbing to the EU empire’.)

Americans should take note of the comment on the Obama Administration.   “The abandonment of American strength” is a good way to put it.   The consequences of his neglect can be seen in the Middle East and, increasingly, in other parts of the world.

There may only be one year left of the Obama Administration, but will things be any better afterwards?   Will a new president be different?   Some candidates threaten to bomb their way to victory in the Middle East, failing to learn the lessons of the past.   Most, maybe all, are simply clueless when it comes to understanding that part of the world.

Once again, the question is:   what are we doing there?