Religion is very much in the news these days.

Donald Trump, the leading contender for the Republican nomination in the US, made a somewhat disparaging remark about Dr. Ben Carson’s religious affiliation.   Carson is the closest rival to Trump. Whereas Trump is a mainstream Presbyterian, Carson is a Seventh Day Adventist.   Mr. Trump said he knew nothing about the SDA’s, but said it in such a way that it made the church and its members decidedly odd.

For the record the Seventh Day Adventists share many beliefs in common with the Presbyterians and other mainstream Christian denominations.   The difference between them is that the SDA’s worship on the seventh day (Saturday) as Jesus did.

Coincidentally, the new President of Fiji is a Seventh Day Adventist. His role is largely a ceremonial role, similar to that played by Queen Elizabeth, who was Fiji’s Head of State until 1987.

Four years ago, in the United States, Mitt Romney’s Mormon faith, was a factor in the election.   It was not to his favor.

It’s a pity leaders do not heed the words of the Apostle Paul in Philippians 2:12 to “work out your own salvation with fear and trembling.”   Each individual needs to work on his own relationship with God. Christians should be careful not to judge others who may hold to a different Christian tradition.

It’s not just Christian beliefs that have come up in this election. Earlier in the current election campaign the issue of a Muslim president came up.   Neither of the two leading contenders was in favor, but the issue gave the media an opportunity to once again portray both men in a negative light.

Meanwhile, across the pond, the Hungarian Prime Minister has again expressed the fear that the flood of immigrants arriving in Europe will destroy the continent’s Christian (i.e. Catholic) roots.

Europe certainly does have Christian roots, but there is little evidence of those roots these days, as most people have embraced secular humanism.   Only Russia’s leader seems to hold any serious Christian beliefs.   Fortunately, he seems set on saving Christians in the Middle East from Islamic extremism.

In today’s USA Today, an article carries the headline, “Under ISIL’s brutal rule, Iraqis are in constant fear,” written by Kiran Nazish.     A schoolteacher who escaped last month is quoted as observing:   “In more than one year, the Islamic State has created a society where it’s normal for children to watch their elders being murdered by them.”

If you didn’t get it the first time, be sure to read that sentence again.   What it’s saying is that children are watching other children murder adults.  Other articles in recent months have claimed that children not only shoot adults, they are even being trained to behead them. This is the kind of world we now live in.

Fearful of Islam and those refugees from Islamic lands crossing their borders, Poles voted yesterday for a more conservative government.  This is likely to be a trend across Europe as people put security at the top of their concerns.

By far the worst and most serious religious conflict has flared up again in Jerusalem, where Palestinians have been waging a renewed intifada against Israel.   The first intifada was in 1987.   They are trying to drive the Jews out of the West Bank.   If they succeed, it would be a prelude to driving them into the sea.

Palestinians have been angry over the Israelis not allowing young men on to the Temple Mount, which they call Haram al-Sharif (the Noble Sanctuary).   It’s also a part of the general frustration they feel after seventy years of the nation of Israel.

Meanwhile, an old issue has resurfaced – the role of the Grand Mufti of Jerusalem during World War II.

“Philadelphia, PA – Israeli Prime Minister Benjamin Netanyahu has drawn criticism for comments about the role of al-Hajj Amin al-Husaini, the Grand Mufti of Jerusalem, in conceiving and perpetrating the Holocaust.   Indeed, leading Nazi aides testified that al-Husaini was one of the instigators of the genocide.  In his 1999 autobiography, a senior Nazi official admitted how he advised Hitler and other leading Nazis, and that he acquired full knowledge of the ongoing mass murder.

Middle East Forum scholar, historian, and author Wolfgang G. Schwanitz added, “It is a historical fact that the Grand Mufti of Jerusalem al-Hajj Amin al-Husaini was an accomplice whose collaboration with Adolf Hitler played an important role in the Holocaust.   He was the foremost extra-European adviser in the process to destroy the Jews of Europe.”  (“Mufti Advised Hitler on Holocaust”, Middle East Forum, October 21st.)

The Mufti’s successor, Sheikh Muhammed Ahmad Hussein, is now saying that the Temple Mount never housed a Jewish Temple and that the al-Aqsa mosque has been there “since the creation of the world” (Times of Israel, Monday).

If these words were intended to be the last word on the most disputed piece of real estate in the world, he may be surprised at the reaction.

The latest uprising by Palestinian youth has led to the murder of Jews on the streets of Jerusalem.   The Israeli Prime Minister Benjamin Netanyahu is now allowing Palestinian youths on to the Temple Mount, even though it poses a security risk.

There are increasing calls from religious and regional leaders for international supervision of the Temple Mount.

To think that fifty years ago, when I was a teenager, it was widely thought that religion and religious conflict were things of the past! 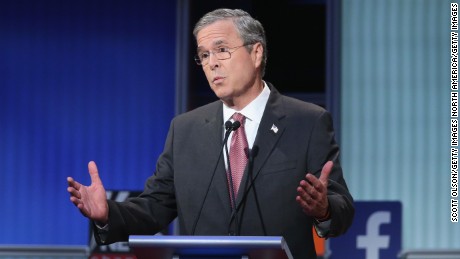 Following the Republican debate Thursday evening, one newspaper quoted on PBS’ McLaughlin Group observed that Jeb Bush spoke as if he thinks that America’s problems are all psychological and not real at all.   The Bushes have done well and live the dream and can’t understand why others have failed to achieve the same.

On Sunday, reports from Moscow showed a similar problem. President Vladimir Putin, by some accounts now the richest man in the world, thanks to the accumulation of ill-gotten gains, ordered the destruction of 350 tonnes of food from the EU in retaliation for western sanctions on Russia.   Mr. Putin’s decision shows that he is oblivious to the fact that millions of Russians are struggling to feed their families.  40% of Russia’s food was imported before the sanctions were announced.

Jeb Bush and Vladimir Putin aren’t the only two politicians who are out of touch with reality.   It’s difficult, for example, to imagine how Hillary Clinton, who, together with her husband, earned approximately $30 million last year, can possibly claim to represent the middle class.

It’s dangerous when politicians at the top are out of touch with people at the bottom.

In 1789, France’s Queen, Marie Antoinette supposedly said: “Qu’ils mangent de la brioche”—“Let them eat cake.”   That same year, the monarchy was overthrown and, three years later, the hated Marie lost her head to Madame Guillotine.   It wasn’t that simple.   The queen actually did a great deal for the poor through her charitable work and the words she supposedly uttered were recorded over a century earlier, attributed to the Spanish wife of King Louis XIV.

But hungry people don’t care about historical accuracy – they just want to eat.

A lack of food has been a regular cause of revolution throughout history.   In 1917, a bread riot in Petrograd (St. Petersburg) started the revolution that led to the downfall of the 300-year-old Romanov dynasty.   It’s not inconceivable that something similar could happen to Mr. Putin.   Of course, the revolution did not improve the situation – seven decades of communism included many years of famine and regular food shortages even at the best of times.

No nation is exempt.   If billboards in Michigan are to be believed, one in five Michigan children go to bed hungry.

Former presidential candidate Ross Perot warned a few years ago that food stamps are all that stand between us and anarchy – in other words, take away free food for the poor and you could see a revolution in the United States.

In June, 1932, veterans marched on Washington demanding that a bonus they were promised by Congress should be brought forward as, in the midst of the Depression, they could not afford to feed their families.   They built shanty-towns outside of Washington and were determined to stay until Congress met their demands.   President Herbert Hoover sent in troops under the command of General Douglas MacArthur to tear down the camps and send them home.   Reports at the time tell of great hunger amongst the vets and their families, including young children.   President Hoover was seen to be out of touch and uncaring (the shantytowns were dubbed “Hoovervilles”) and lost the election a few months later to Franklin Roosevelt.

Mr. Bush should remember the fate of the last Republican presidential candidate, Mitt Romney, who lost the 2012 election to Mr. Obama.   Mr. Romney was recorded dismissing the “47%” of the electorate who depend on government and who, therefore, were not going to vote for him anyway.

Mr. Romney and Mr. Bush, both claiming to be conservative, should have read a biography of Benjamin Disraeli, the nineteenth century Conservative British prime minister who warned of Britain becoming “two nations,” one rich and the other poor.   He reshaped the Conservative Party to be a party that reached out to the working-man.   If the Republicans are to succeed, they have to do the same, to show how their policies will help improve the life of Joe Citizen.   To do this, they need to distance themselves from Big Business.

They can do it.   The 1896 election was held in the midst of a Great Depression that saw 50% of the people unemployed, at a time when there were no unemployment benefits for those who were out of work.   Understandably, the election saw the highest turnout in American history.   80% of the electorate voted.   The presidential election that year was won by Republican William McKinley.   He promised the people sound money and high tariffs to increase employment at home.   It’s interesting to note that the same issues still prevail.

Left-leaning parties, whether the Democrats in the US or the Labour Party in Britain, do not represent working people.  They are the parties of Big Government, which gives jobs to their supporters, but leads to a rise in taxes.   Those taxes are paid by ordinary people and small businesses, making life harder for the majority of people.

Leaders, and aspiring leaders like Jeb Bush, cannot afford to be out of touch with the common people.   This is especially true in democracies where every citizen has the vote.   Perhaps Mr. Bush and Mr. Putin should copy Britain’s Prince William, who spent the night sleeping on the streets of London to get the feel of homelessness.   At the very least, his gesture showed empathy with the poor, a realization on his part that tens of thousands of people are homeless and unable to take care of themselves.

Only a return to conservative values, including restoration of the traditional family, can help people get out of poverty.   Conservatives everywhere need to convince the voters that they represent them and not Big Business.

They could start by following the example of Menachem Begin, an Israeli conservative and former prime minister.   Mr. Begin spent many years in prison under the Bolsheviks.  Reading a biography of Benjamin Disraeli helped him maintain his sanity and inspired his future conservative course.   Focusing on struggling voters makes more sense than pursuing big business!  After decades of Big Government, people want change.