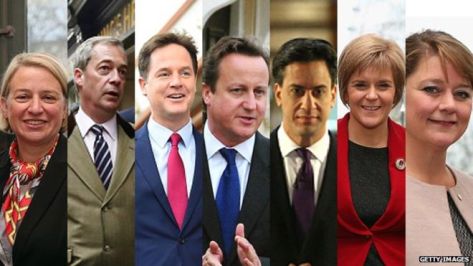 In case you haven’t noticed, the United Kingdom is in the middle of a general election campaign.   The election itself takes place on May 7th, which does not leave much time for campaigning.

On Thursday, the seven leaders of the seven major parties held a televised debate on national television.   The debate was two hours long.   I watched it on “BBC World News” where it was shown live. There was only one brief commercial break in the middle.

The parties clearly divide into right and left.   The three parties that are supportive of austerity are the ruling Conservatives led by David Cameron, the Liberal Democrats led by Nick Clegg, and UKIP (the United Kingdom Independence Party) whose leader is Nigel Farage.   The Liberals are more in the center, but when it comes to spending, they believe in a balanced budget.

The ruling coalition since the last election in 2010 imposed austerity measures on the country, but has found it difficult not to overspend.

The other four parties represented are all to the left of the political spectrum.   All leaders were in favor of more spending on this or that and seemed to have no concept that all government spending is dependent on the success of the private sector, which they are inclined to want to clobber with more and more punitive taxes.   A favorite in the debate was a “mansion tax” on homes worth over two million British pounds ($3 million).   They do not realize that wealthy people have the option of moving to other EU member countries and can take their money with them.   They would also enjoy a better climate!

The four leftist parties are the Labour Party, led by Ed Miliband. To his left are Nicola Sturgeon, leader of the Scottish Nationalist Party (SNP), Leanne Wood, leader of Plaid Cymru (the Party of Wales) and Natalie Bennett, leader of the Green Party.   All four kept demanding more money for their pet projects.   Apart from the suggestion of a tax on mansions, the three ladies also insisted on defense cuts, notably that Britain not modernize Trident, its nuclear weapons system.

No commentator pointed out that the ladies’ demands would cost the English taxpayer more money.   Already, the English bankroll the Scots and the Welsh – and, together with Germany, the EU.   As Mr. Farage pointed out, the subsidy to the EU amounts to ten billion pounds per day ($15 bn).

This is one reason why Nigel Farage wants Britain to pull out of the EU.   He constantly focused on this one issue when answering questions.   The EU does not allow Britain to govern itself.   On immigration, for example, a major issue in the UK, London cannot do anything because of treaty obligations with the rest of Europe, which allow for the free movement of people.   The Germans are insistent that this remains the case, even though it costs the UK tax-payer a great deal of money.   Immigrants from the rest of the EU can claim British welfare benefits upon arrival in the country and can use the free health service.   They can even claim family allowances (a weekly child benefit) for children they left behind.

When Mr. Farage pointed out that last year 7,000 people were diagnosed as HIV positive and that 60% of these are foreigners, he added that each one will cost the taxpayer 25,000 pounds a year ($37,500).   Nicola Sturgeon came right back accusing him of being “heartless,” saying that his comment was “shameful.”   For this she received loud applause.   Yet the liberal “Independent” newspaper reveals in a poll that half the British people support him on this issue.

Ms. Sturgeon seems adept at spending other peoples’ money.   She reminded me of Margaret Thatcher’s famous dictum:  “The trouble with socialism is that eventually you run out of other peoples’ money.”   If any of these three ladies has a major role in the next coalition government, the country could follow Greece toward financial ruin.

Polls after the debate said that Nicola Sturgeon did best.   If her party wins a lot of parliamentary seats in Scotland, they could enter a coalition with Labour and spend to their heart’s content – or, at least, until they run out of other people’s money!

It’s difficult to imagine a right of center coalition that includes the Conservatives, Liberal Democrats and UKIP.   It may happen.   But if David Cameron needs UKIP to get the 318 seats necessary to form a government, he will have to give Nigel Farage what he wants, which is a referendum on EU membership by the end of the year.

Everything is up for grabs – anything could happen at this point in time.   But the most likely outcome will be a return of the Conservative-Liberal Democrat coalition, which has ruled the country for the last five years.   Noticeable during the debate is that the two leaders of these parties did not seriously attack each other, allowing for a continued marriage of convenience after the election.

With this election, it can truly be said that Britain is at a crossroads.   Everything achieved over the last few years of austerity could easily be lost, throwing the economy into a downward spiral; relations with Europe are also at stake at a time when the continental nations that comprise the EU are drawing closer together, with Germany very much in the driving seat.

A turbulent six weeks lies ahead as Britain prepares to vote on May 7th.

Americans are already in the midst of electioneering, for an election that’s still 22 months away.  They can be forgiven a case of envy when they learn that the United Kingdom’s election period will only last 38 days.

Elections used to be fairly routine, with either the Conservative or the Labour party winning.

In 2010, that changed.  Neither party won a majority. David Cameron, the leader of the Conservative Party and Nick Clegg, the leader of the Liberal Democrat Party agreed to form a Coalition government.   Later, the two had to agree on austerity measures to get Britain out of the international financial crisis.

Today, the country has the fastest growing economy out of all the major western democracies.   Austerity seems to have worked better in Britain than elsewhere in Europe.

This time, there are a number of parties campaigning to win seats in Britain’s “first past the post” system.

The country has 635 constituencies.   Whoever gets the biggest number of votes in each of these, is elected to parliament.   The leader of the majority faction then becomes prime minister.

This time, however, there are more than three parties.

The Conservative, Labour and Liberal Democrat parties will all be putting up candidates.   In addition, there’s a fairly new party called UKIP (United Kingdom Independence Party), which is campaigning for Britain to withdraw from the EU and to do something about immigration, which many see as out of control.

Their leader, Nigel Farage, has already said that if David Cameron, the current prime minister, needs UKIP’s help to form a right-wing coalition government, he will insist on a referendum on Britain’s continued membership of the EU by the end of this year.   Mr. Cameron wants to delay it until 2017 when more Europeans will have moved into Britain, making it more likely that a “yes” vote would be returned.   Anybody from the EU can vote in referenda, though not in general elections. That requires full citizenship.

On the left of the political spectrum, for Labour’s Ed Miliband to form a government, he will likely need support from the SNP (Scottish National Party), Plaid Cymru (Welsh nationalists) and even the Greens (environmental party).   All of these parties will want government spending to increase, thereby jeopardizing the recovery the present coalition has engineered.

There are also smaller parties representing Northern Ireland, which may be needed to form a coalition.

It’s all suddenly become very complicated, but the old days of two-party politics seem to be over for good.

The next occupant of 10 Downing Street will be the man who can successfully haggle with other party leaders to reach the magic number of 318 – that’s just over 50% of all the seats in parliament, without which governing would be almost impossible.