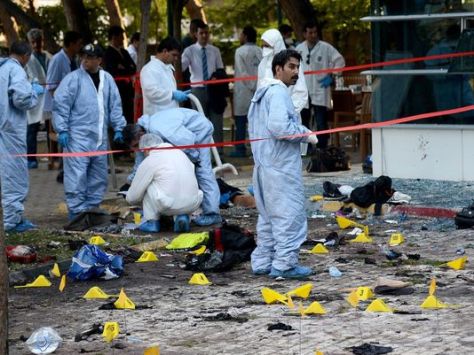 In my last post, I wrote about the fall of Constantinople.  In 1453 the city fell to the Muslim Turks and was soon renamed Istanbul.

This post begins with mention of Istanbul, one of the most interesting cities that I have ever visited.   Not only was it founded by Constantine the Great in 330, it was the capital of the Eastern Roman Empire, Byzantium, for a thousand years.

When you walk around the old part of the city, you are walking on 1700 years of history.

No wonder so many tourists visit Istanbul.  Ten of them were killed this morning, eight of them Germans, when an ISIS suicide bomber from Syria blew himself up.   In a statement, ISIS said there would be more and bigger bombs.  This was the fourth ISIS attack in Turkey in six months.

Whether or not ISIS was deliberately targeting Germans is not known.  The attack was deliberately perpetrated in the tourist area of the old city, close to the Blue Mosque and not far from the Hagia Sophia, a 1500-year-old church built by the Eastern Emperor Justinian in the sixth century.   The church has survived a number of earthquakes and the fall of Justinian’s Empire – whether it will survive ISIS remains to be seen. Turkey is likely to see many more terror attacks.

Germany is also likely to suffer at the hands of terrorists, made more probable by Chancellor Merkel’s “open door” policy to Syrian refugees.   One million refugees arrived last year.   Things are not going well.

On New Year’s Eve, about a thousand Middle Eastern and North African men descended on the area around Cologne Cathedral. During the course of the evening, dozens of German women were sexually assaulted and a few were raped.   It turns out that, contrary to claims that almost all the refugees were women and children, in fact 80% were young men!

This has naturally led to greater demands for the refugees to be deported.   A big demonstration in Leipzig yesterday got out of hand, adding to Chancellor Merkel’s woes.   With more refugees set to arrive, the problem is set to get worse.

Meanwhile, Germany is dealing with foreign policy challenges that threaten the coherence of the European Union, of which Germany was a founder member and is the biggest economy.

German Foreign Policy reports:  “High-ranking German politicians are calling for punitive measures against Poland.   The Polish government’s measures neutralizing the country’s constitutional court as well as its new media laws are “in violation of European values,” according to Volker Kauder, Chair of the CDU/CSU parliamentary group.    The EU member states must now “have the courage to impose sanctions.” “

With the above problems, there may be little time to give any attention to Britain’s campaign for changes to the EU Treaty that would alleviate some of the financial burdens on the UK from its EU membership.

A report in the Guardian newspaper yesterday claimed the EU would play “hardball” with London, as they have nothing to lose.   If the UK leaves the EU, it could face punitive measures that would make it harder for the country to trade with its European neighbors.

The same article also pointed out that the Scots are not as keen on leaving the EU as their southern neighbors in England.

A withdrawal from the EU may be a setback for the project of European unity, but it could also lead to the breakup of the United Kingdom.