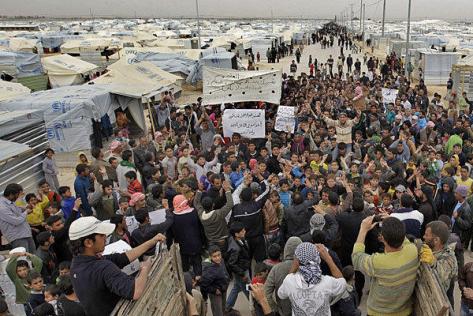 One of the great ironies of the last fifty years is that the peoples who supposedly rose up against their colonial masters and achieved independence have been moving en masse to the very countries they rebelled against!

This exodus of people from Africa and the Middle East has increased in recent months with increased turbulence in Libya, Somalia, Yemen, Syria and Iraq.   Eritreans are also moving to Europe to get away from that country’s brutal dictatorship.   Many flee by land to Libya, then cross to Italy by sea.   Over 400 died today when their boat capsized, a fairly regular occurrence.

The Europeans, it seems, cannot do enough to help resettle all these refugees.   The United Nations is criticizing, claiming they are not doing enough.   It should be realized that the U.N. is dominated by people from the same areas of the world as the refugees.   As failed states rapidly fall apart, people want to seek refuge in western Europe.

It should be noted that the six countries all mentioned above are Islamic.   The problems these countries face are deeply rooted in the Muslim religion.   People flee from these lands, but when they arrive in their new countries, what do they want to do?   They want their new countries to embrace Islam!   They have clearly learned nothing. At the same time, they want to make everybody else’s lives miserable.

So, what should western countries do?

The first priority of every government is national security.   Who is to say that, amongst all those fleeing Islamic lands, there may be some who want to get to Europe, North America and Australia, in order to stage terrorist acts?   It’s not only possible, it’s actually quite likely.

The perception of increased threats to security is fueling the growth of right-wing political parties in some European countries.   This poses a serious threat to liberal democracy and the cohesion of the western alliance.

At the same time, the sheer numbers of people in transit constitutes the equivalent of an invading army.   If the cultural identity of nations is to be preserved, something must be done to stop the invasion.

Clearly, European rule of these nations cannot have been so bad, if the native peoples are now moving to the former rulers for “freedom.”

Perhaps a solution is for those same western European nations to seize a small coastal area of the troubled countries, establishing an enclave, or “colony,” which would enable those citizens who want to flee to the West to remain and live under western rule?   This is, after all, what Hong Kong was all about.

Of course, this is not going to happen.   The United Nations would throw a fit, screaming “colonialism.”   As they cannot say anything positive about any of the countries taking in the refugees, perhaps they should open up the United Nations building and all available surrounding land to house them and feed them – at their own expense, of course.

One thought on “RECORD NUMBERS OF REFUGEES REACHING EUROPE”